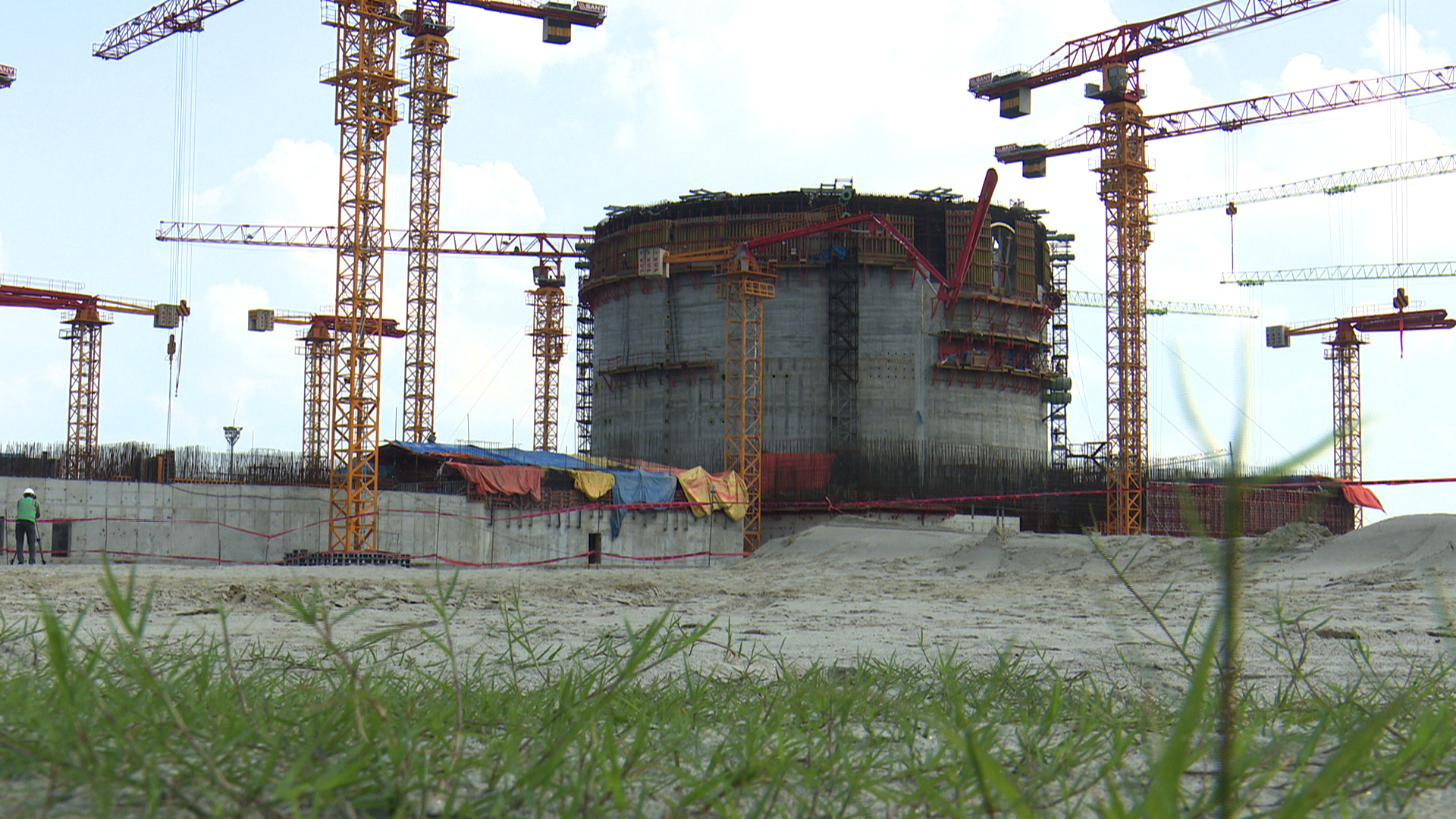 Bangladesh, as a country, is facing an urban energy crisis distinguished by power shortages and skyrocketing gas consumption and a rural energy crisis reflected in the increasing incompetence of the countryside poor people to have access even to low-valued traditional biomass. To conquer these crises, over the last several years, the Bangladesh government has undertaken various projects like Rooppur Nuclear Power Plant Contractor to increase the generation of electricity to cope with the rapid increases in demand and a Nuclear Powerplant could be the best option for that.

Rooppur Nuclear Power Plant (RNPP) will help us to secure a sufficient supply of electricity to derive the desired level of economic growth for socio-economic development and thus improving the basic livelihoods of the urban and rural populations of our nation.

Rooppur Nuclear Power Plant, which is currently being built on the banks of the Padma river in Ruppur, Pabna, and will be the first nuclear power plant in Bangladesh. Under the strict supervision of the International Atomic Energy Agency (IAEA) and national regulatory authority, Bangladesh Atomic Energy Regulatory Authority, the commencement of commercial operation of Rooppur NPP Unit 1 is scheduled at the beginning of 2023, while Unit 2 for 2024.

The total capacity of Rooppur NPP is 2.4 GW and it also has an extended 60-year service life, load-following capability, high capacity utilization (90%), and an 18-month refueling cycle (Uranium- 235 will be used as fuel).

Rooppur NPP is one of the latest additions to the Russian VVER (Water-cooled Water-moderated Power Reactor) reactor plant of AES – 2006 (VVER –1200, V-392M) technology by adopting the site-specific safety features. VVER-1200 is a flagship nuclear reactor and a core product of ROSATOM’s integrated solution.

The design of Rooppur NPP reactor Unit 1 and Unit 2 is developed based on the VVER-1200 reactor plant with the elaboration of designing, equipment manufacturing, construction, and commissioning experience of Novovoronezh NPP-II and experiences in operation of the most recent VVER reactors in Russia and abroad.

Nuclear Power Plants (NPPs) and related construction projects are the growth engine for any region where they are constructed. Though they require high up-front cost which was identified as one of the key issues and challenges in the implementation of Ruppur Nuclear Powerplant (RNPP), if we consider the long-life times and low running costs, then our Rooppur Nuclear Power Plant will be a valuable long-term national asset.

Rooppur Nuclear power plants (RNPP) will not only be able to generate low-cost electricity and meeting current society’s demand for reliable and affordable electricity but also it will provide employment opportunities and revenues from taxes which will help to support a healthy economy. Bangladesh has adopted a policy to finance Rooppur NPP project under a bilateral arrangement with partner country Russia and decided to go with an experienced vendor, ROSATOM, one of the global technological leaders – which is a Russian state corporation headquartered in Moscow that specializes in nuclear energy, implementing various NPP projects all around the world.

To perceive the benefits of the Rooppur Nuclear Power Plant (RNPP), we can compare it to other energy sources. If anyone thinks that the advantages of nuclear power plants over conventional power plants are not so great, then they are gravely wrong.

Fuel consumption is one of the important indicators in the power generation sector. How good are nuclear power plants in that relation? The modern VVER-1200 reactor requires only 29 tons of uranium fuel per year. During this time, a coal plant of similar capacity “eats” 40 thousand railway cars of coal

The total length of the imaginary train that carries this amount of fuel will exceed 500 kilometers! Let’s think through in a different way. The amount of energy emerging during complete “combustion” of 1 kg of uranium-235 (Which will be used as the fuel of Ruppur NPP) is about 2.5 million times greater than for 1 kg of coal.

There is an opinion that gas plants provide cheaper electricity – thus, it is better to build them instead of nuclear power plants. Indeed, the share of heat that is converted into electricity in natural gas units is higher. But there is another important characteristic, the Installed Capacity Factor.

This parameter shows how much of the plant’s power is actually used to generate electricity. And according to this indicator, modern nuclear power units are more than twice as ahead of gas stations: 91.5 % against 42.5 %. A gas-fired unit, similar in capacity to the VVER-1200 power unit, burns 1300 million cubic meters of natural gas per year.

This volume could be used, for example, to synthesize 1.3 million tons of formaldehyde. Some believe that nuclear power plants can be replaced by natural gas-fired thermal power plants. Maybe so but let us compare: 1 liter of natural gas will heat up a liter of water by 8.5 degrees.

At the same time, 1 liter of uranium fuel will boil about 150 thousand cubic meters of water! Also, gas is used to produce dimethyl ether, acetylene, acetic acid, and other important products.

From this point of view, a gas-fired unit is some kind of “evil machine”, annually destructing huge amounts of valuable raw material for the chemical industry!

Therefore, the superiority of nuclear fuel over other types of fossil fuel is not just “great”, – it’s gargantuan. The Rooppur NPP has some special economic benefits due to a very large generation capacity over a longer service life. Stable fuel and O&M costs also add to the benefits from an economic perspective.

In spite of the huge capital investment during the construction period, the Levelized Cost of Electricity was predicted less than 5 Tk / unit in the Feasibility Study report whereas the average generation cost of electricity is much higher than this rate in the current power generation mix of Bangladesh.

Presently, primary commercial energy resources include natural gas, oil, condensates, coal, peat, and renewable energy resources. Biomass still plays an important role in the country’s energy consumption in rural areas. But to cope up with the growing demand and securing energy security, the Bangladesh government is actively considering the use of nuclear energy for electricity generation as the primary source of energy. Nuclear energy is a part of a diverse and balanced generation mix and energy security is strengthened when a nation uses it.

The Rooppur Nuclear Power Plant (RNPP) project is the largest infrastructure project in Bangladesh. The construction of our very own NPP in Ruppur is going to enhance the development of the social and economic, scientific, and technological potential of the country and promoting Bangladesh to become a member of the elite “nuclear club” of countries that have nuclear technologies.

In Bangladesh, the acceptance of nuclear power is in general favorable, especially in and around the Rooppur Nuclear Power Plant site. This is evident from the fact that, in spite of the inordinate delay and land being a precious commodity for the villagers, it has been possible to retain the land for the project for about four decades. The general perception is that the construction of an NPP would create job opportunities and have other spin-off benefits for the residents.

Many people believe that the full benefit of a nuclear power plant lies in the electricity it generates. However, the construction of NPPs can give a powerful impulse to the development of the community: as a rule, the building of power units is accompanied by appearing of new jobs in the region, laying of roads, water pipelines, and gas supply networks, opening of hospitals and other social facilities.

Nuclear Power Plant (NPP) can also be used to solve other important problems – for example, to obtain clean freshwater: a modern nuclear power unit can be integrated with a desalination complex producing 170,000 cubic meters of pure water per day. This will be enough to supply a population of a large (400,000-500,000 citizens) city.

Nuclear energy is clean air energy, avoids polluting the air that we breathe. Nuclear power plants don’t emit any greenhouse gases, unlike coal and natural gas. As a result, they don’t contribute to climate change. This benefit is becoming more attractive as the world seeks to reduce global warming. Nuclear power plants are also more resilient than other forms of energy production during natural disasters.

For example, hurricanes can destroy solar and wind farms. They are less likely to damage the reinforced buildings that house nuclear plants. Many people believe that the proximity to the nuclear power plant poses a hazard. But in reality, as a rule, the health of the population of the NPP’s satellite cities is better in comparison with the neighboring cities. This is due to the more favorable environmental conditions and the higher standards of nuclear workers’ living.

Though nuclear power will not be able to fully substitute fossil fuel yet, it can play a consequential role in de-carbonizing and eventually become the sole sustainable energy resource in Bangladesh. Rooppur Nuclear Power Plant (RNPP) project has been considered economically, technically, and financially viable and environmentally acceptable as an option in the country’s long-term electricity generation and the Bangladesh government is also willing to take the necessary steps to successfully implement this project for secured electricity supply to sustain our country’s economic development.

If you enjoyed our article and think it was beneficial, don’t forget to share it with others.